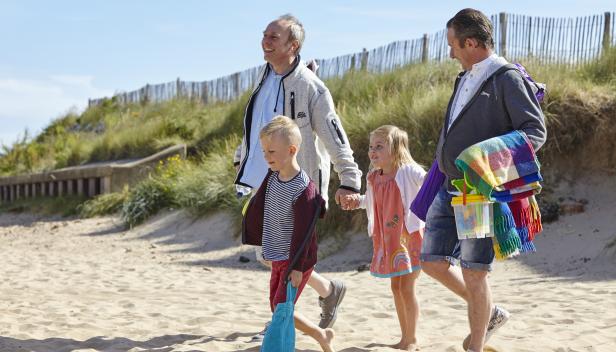 The couple say that the adoption training from Coram was “really helpful and practical” and that they also felt prepared for the more challenging moments throughout the process.

The couple’s social worker went through different children’s profiles with them and encouraged them to be realistic about what they were able to take on, as Ben describes: “Our social worker was really helpful in saying ‘think of the life you’ve described to me, imagine how your life would have to change’ and that helped us realise what was appropriate for us.”

Siblings Lydia and Spencer, aged two and one at that time, were the first children Ben and Adam were put in touch with and Ben recalls feeling an “instant excitement and connection.” He continues: “I remember the night before the confirmation on whether we would be their adoptive parents - the waiting then was the hardest part of everything, we couldn’t sleep because of excitement and nerves. But it was a wonderful process.”

The difference support has made

The couple were approved to adopt the children and the whole process took around a year in total. Ben says that the support from Coram as the children settled into their new family was invaluable.

“We felt really equipped with support and evidence-based knowledge - you feel like you’re not alone. You also learn so much in the first year of having the children - you’re learning all the time.” - Ben

The support from Coram has continued for the family in the years since the adoption, particularly around Spencer’s needs. Ben explains: “Spencer had some problems relating to trauma, and it manifested in different ways over the years. Coram was fantastic - we had psychology, play therapy, stay and play sessions, and he now has regular occupational therapy funded through the adoption gateway, all supported by Coram which we are so grateful for.The support has been absolutely second to none.”

Ben and Adam have also attended Coram’s ‘incredible years’ parenting group which they found very helpful and say that since the children have started school, they are using more and more of the strategies that they learned and would ‘really recommend’ it to other adopters.

The children are now both at school and are doing very well. Ben says: “They are very confident, funny and outgoing. We’ve seen real changes in their personalities. Spencer had a complete turnaround - he is the most outgoing person, he loves school, he is so funny, cheeky, interested in everything, and Lydia is so affectionate, caring and thoughtful.”

Adding to our family

Ben and Adam are now in the process to adopt a third child through Coram.

Ben says: “We’d love to have another child because we love our children and we love being parents. We believe we will be able to parent three. The main thing for us is thinking about our children’s needs. We’ve started to talk about it with them and understand that it will throw up a lot of questions for them around the process of adoption. They know about it all and being an active part of it will be healthy but it will have to be carefully managed. We hope to be parents again within the year which will be fantastic.”

Ben and Adam say they would recommend adoption to anyone thinking about it and say: “Adoption is a very different form of parenting to biological parenting and I think it’s quite hard to understand that before you do it, so we try to explain the realities to anyone considering it. We also say make sure you have a good support network and learn all you can about therapeutic parenting because it’s hard to fully understand it all in advance. It’s really paying off with our children.”

“Adopting our children is absolutely, one hundred per cent the best thing we ever did, no doubt about that.” - Ben