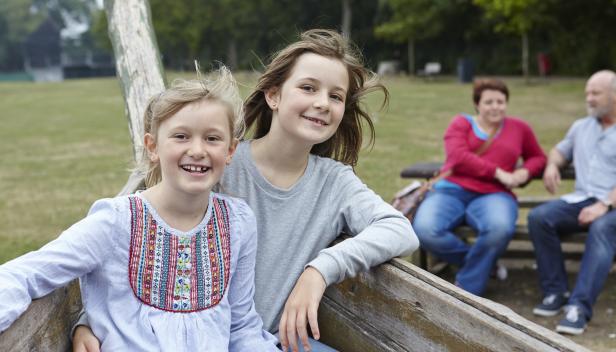 Anna and Jack adopted Olivia and Emily when they were toddlers

Anna says: “From the moment I phoned Coram, we realised they were professional, courteous and respectful.”

The couple went along to an opening evening at Coram and then they decided to proceed, starting an eight-week training course. Anna says they found the course “really useful and helpful” but challenging at times: “Sometimes we’d walk away feeling like ‘we’d never be able to deal with that’ as you were hearing a lot of very difficult information about the children, their needs and early traumatic experiences.”

They then went through the assessment process which Anna says was “not at all intrusive… it was just like having a chat, and our social worker was so professional and respectful, it was like talking to a friend. And if you didn’t want to discuss something that was fine.”

Anna continues: “This was our groundwork for developing our relationship with our social worker so by the time we were assessed we were very trusting in her and we could have open conversations about what type of children we could manage.”

We wanted to adopt siblings

They knew they were keen to adopt siblings from the start. Anna says: “I had friends who had struggled with being adopted and not having anyone they could really relate to. We thought that siblings will always have each other.”

Anna and Jack were approved as adopters but then had to take a break from the process for a year or so due to family circumstances, so the process took a bit longer than it might otherwise have done.

Anna says: Coram was great about this; they invited us in for a chat and knew we’d been going through a bit of a hard time.”

Anna and Jack were visiting family abroad when they got the call from their social worker about Olivia and Emily. Anna recalls:

Our social worker was very positive and excited that these two little girls were absolutely for us.

They were approved to adopt Olivia and Emily who were aged two and a half and 18 months when they moved in.

The couple said that the training they had received from Coram and ongoing support from their social worker was vital during the girls’ transition from foster care.

Anna says: “We really listened to the advice from Coram. Things like making sure you use the same food that they had at their foster carers, using the same fabric conditioner, keeping their cots the same. We stuck to a routine and would continually talk to the girls about what we were going to be doing the next day so as they always knew what was happening next.”

There were challenges in the early stages of the girls moving in. Olivia would get up each morning, put on her coat and wait by the front door and say she wanted to go, which lasted for about a month. Emily would struggle to get to sleep at night and wouldn’t want to be hugged or calmed down and Anna said it took around 18 months to two years before she could really be comforted. But all the while there were other improvements as the girls continued to settle with them.

Anna says: “Once the girls were placed, we had a phone call every day from our social worker and we saw her at least once a week for the first month. She was always at the end of the phone and always checking in with us. Her wealth of experience was just invaluable.”

Coram also advised Anna and Jack to apply for the Adoption Support Fund which gave them access to a child psychologist and also music therapy for both girls which Anna says has been "fantastic".

Anna and Jack say they would definitely recommend Coram to other prospective adopters. Anna says: “The girls know about Coram and that as they grow older they can return to the same place to get help.”

Their advice for others considering adoption would be: “Talk to other adopters, get as much information as you can. Understand the process and understand that it can be rocky but that there’ll be great times as well. Don’t be afraid to ask for help. If you’re in a couple, be open with one another. You have to do some soul-searching with yourself, your partner and your social worker.”

Anna concludes: “It is important to understand the particular challenges around sibling adoption but the rewards are fab. It’s so lovely to see them when they are getting on and supporting one another.”

Could you adopt one or more children?

We would love to hear from you if you believe you can offer one or more children the time, love and commitment they require to grow up feeling safe and happy.